In 1913, Ontario Chief Justice Sir William Meredith completed a three-year Royal Commission researching workers' compensation laws around the world. He introduced the historic compromise that is maintained to this day: injured workers gave up the right to sue their employers in exchange for guaranteed no-fault benefits in the event of a work related injury or illness, and employers agreed to pay for the system, in exchange for protection against lawsuits.

Meredith's five key pillars would serve as the basis for workers' compensation legislation across Canada:

In 1916, John W. Wilton, MLA and well-known Winnipeg lawyer, introduced The Workmen's Compensation Act and is credited with single-handedly shepherding it through the Manitoba Legislature.

On March 10, 1916, the 15th Manitoba Legislature passed The Workmen’s Compensation Act, becoming the first province outside of Ontario to enact a version of Sir William Meredith’s workers compensation laws.

In 1974, the Manitoba Government decided to amend the language of The Workmen's Compensation Act to more accurately reflect the modern workforce – changing all mentions of workmen to workers.

See our Centennial Calendar for photos and more information about the WCB's last 100 years.

Will be located in Lecture Theatre I in case of inclement weather.

Portrayal of John W. Wilton, MLA who shepherded The Workmen's Compensation Act through the legislature in 1916.

Noreen Duncan, daughter of Norman Elliott, pioneer of Return to Work at the WCB

It's Time to #WIN100!
If you're a young Manitoban between the ages of 14 and 24, you could win a $1,000 bursary for post-secondary education and two tickets to Kanye West at the MTS Centre!
All you have to do is upload a photo or video to Instagram, Facebook or Twitter and tell us how the WCB is here to help. Don't forget to include the hashtag #WIN100!
It's that easy. Contest runs September 1 - October 2, 2016.
Download the contest poster. 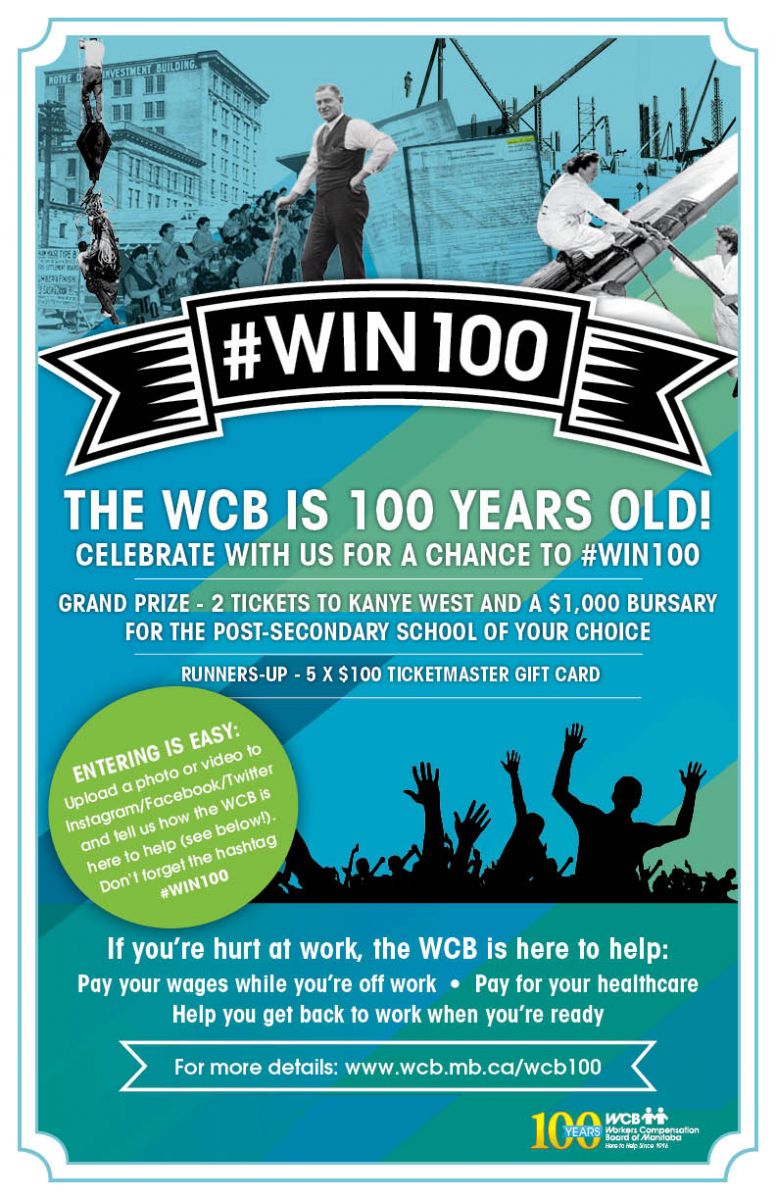